Well, we're back in Pittsburgh, with the Steelers-Indy (how ironic) game playing in the background.  As always I was saddened to leave Indianapolis. Great city, great people, and Gen Con is my absolute favorite place to be.  But as I am now DEAD BROKE and everyone else went home anyway, probably for the best to have come home.

As always, I had a blast.  Spent most of the con hanging out with Steve and Davis Chenault, and Richard McBain from Troll Lord Games, hawking my new game, Amazing Adventures, a pulp genre game using the Castles & Crusades SIEGE engine system. Sales weren't bad, and next year they're going to have me back to run demos all weekend at their booth. If you haven't picked up your copy of AA yet, head on over to the TLG website and place an order, or ask your local FLGS to get it in stock--it's entering distribution within a week or two!  We intend to heavily support it, with regular digital content such as encounter areas and mini-adventures that you can download and run with, and there will be full support in terms of sourcebooks and modules.  We have some big plans!

I also got to spend some time with George Vasilakos and Ross Isaacs from Eden Studios, and as always it was great to see George, and it was awesome to get to meet Ross in person after too many years of chatting and working together online!  George and I hammered out an informal agreement for my next AFMBE sourcebook, but I don't want to say too much, lest I jinx it.

I also got to meet Christina Stiles, likewise after far too many years of working and chatting together online, and that was very cool.

By far, however, the highlight of the convention was when Wil Wheaton--Wesley Crusher himself--came by the TLG booth to pick up some C&C stuff. He told Steve he's a big fan, that he loves C&C because he's a huge fan of first edition AD&D and loves how C&C took all of the fiddly stuff from AD&D and replaced it with a smooth, clean mechanic, but in a game that still felt like first ed...which was cool to hear because I have said the exact same thing--often in the exact same words--many, many times.  So after chatting for awhile, Steve sold him on Amazing Adventures, then said, "The author is sitting right there behind you." Wil turned to me and said, "Oh,  hi! I'm Wil Wheaton, nice to meet you!"  He chatted with me for a few minutes (we are both big fans of Realms of Cthulhu) then he said he'd like it if I'd sign my book for him!

I'll repeat that: I got to sign my book for Wil Wheaton!  I was over the moon--a very, very cool experience, and if anyone has any doubts about how "real" Wil Wheaton is, I'm here to tell you he's 100% one of us. Great guy and it was very cool to meet him; the idea that HE wanted ME to sign a book was unreal! I just really hope he digs the game. Somehow I now feel like the pressure is on!

After he left, McBain said to me, "I bet you're over the moon right now."

I said, "Dude, if nothing else happens this whole weekend, if we don't sell a single copy of AA after this, the entire trip was worth it!"

Before you ask, no, I didn't get any photos.  I felt it would be disingenuous to ask him for one, as he wasn't there in "that" capacity, but was just there as a gamer and a customer looking to buy a few books.  I do, however, have a few witnesses!

So, now on to the part that everyone wants to hear...what did I get? 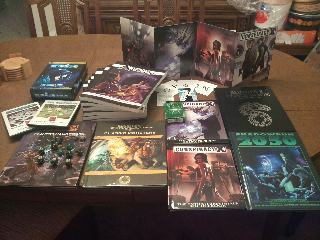