Posted by The Grey Elf on December 27, 2012
And we have a THIRD five-star review of Day of the Worm at DriveThruRPG! 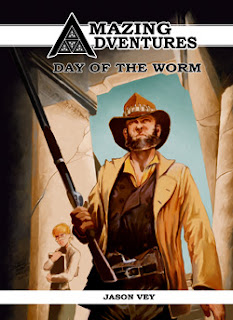 The Thule Society, a dark Nazi cult dedicated to furthering the esoteric knowledge that fuels the ever growing Third Reich, may have acquired the ancient Heart of Yhtill and all the power it promises. Worse still, they appear to have partnered with malevolent aliens known as the People of the Worm, who seek to ensure that World War II devastates the entire planet, leaving humankind ripe for conquest and consumption have come seeking the Heart as well.

The PCs, working with the Allied forces, and alongside fanatical Ormazd Society allies, find themselves in a race against time to stop the People of the Worm from unleashing a doomsday device from within a hidden tomb in Egypt's Valley of the Kings. If only the Nazis and the People of the Worm were their only worries: there is another, equally mysterious force who want the Heart of Yhtill for their own alien agenda…

"It has Nazis, chase scenes, the supernatural, traps, a teriffic cover, and a plot so thick you can cut it with your Crocodile Dundee knife. What's not to like?

Troll Lord Games and Jason Vey have given a very good example of what can be done with their Siege Engine rules and the Amazing Adventures game in particular."
--Chet Cox, DTRPG Reviewer 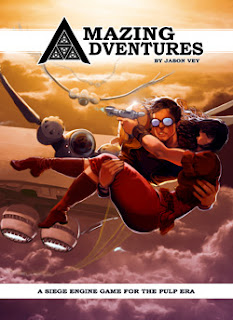 In addition, Amazing Adventures itself has scored a 5-star review both at DriveThru and at RPG.net.

"My imagination is really grabbed by this system. I think there is a lot of potential here and a lot I want to do with this game"
--Timothy Brannan, featured DTRPG Reviewer

I'm incredibly proud of Amazing Adventures. It may be my favorite freelance project ever. I'm absolutely thrilled to see it getting rave reviews by those who have picked it up and given it a look and play.

Unfortunately, we're not going anywhere without some word of mouth and buzz, and there is the rub--nobody is talking about the game, despite pretty much universal rave reviews from those who have picked it up. Help us out! If you haven't picked up Amazing Adventures and Day of the Worm yet, by all means grab your copy today! If you've already bought it and you like it...TALK ABOUT IT! Get the word out there!!! Post on blogs, on message boards, on facebook and twitter. I'm not sure what the process is to submit something for a nomination for an Ennie or Origins Award, but even a nomination submission would be aces for drawing attention to the project. I am negotiating with Troll Lord as we speak for extensive support for the game, but until we see really strong, solid sales, we're likely looking at mostly internet/PDF e-book support and very little in the way of print. We need your help! If we can build a player base and get sales for this puppy going, you'll be amazed (no pun intended) at the ideas I've got for this puppy. Pulp is a limitless genre, and there's no end to the directions we can go...but first, we need to kick open the door, and that's where you come in.

If you haven't picked up a copy, take the risk--I'll give good odds you'll love the game. If you already have it and are digging it, I beg of you--hit the streets, both literal and virtual. Request your FLGS to carry it. Tell people about it. The RPG industry is cramped right now, and it's only by loyal fan-base word of mouth that we can get people out there to discover new games.