Enjoy!
Posted by Timothy S. Brannan at 5:01 PM No comments:

Masters of the Mind: Psionics!

Now in production: Masters of the Mind, an original edition psionics supplement which will be compatible with Labyrinth Lord, Advanced Labyrinth Lord, and OSRIC, but should work with any old-school simulacra game.

As with Spellcraft & Swordplay, this particular supplement came about "by accident," as I was writing an exegesis on the original psionics rules in Supplement III. I discovered, upon reading, that the only thing difficult to grasp on the original rules was the presentation. Once I had read them through several times, they seemed quite easy and it struck me that it's rather a shame that a good presentation wasn't ever put out there; they may have been adopted into many more games. That's my goal here, to put forth an easy-to-grasp version of these rules that will enhance and expand your old edition fantasy games.

The work will include a restatement and reorganization of the original rules for psychic powers for the game, in as clear and concise a presentation as possible. There will be four sections:

Part One: creating the psionic character will include guidelines and rules for bolting psionics onto your game, the effects they have on existing player character classes, and how to obtain and improve psionic powers.

Part Two: Psionic Powers will include power lists, Psionic Strength Point costs for use, and detailed descriptions of all powers.

Part Three: Psionic Combat will explore the use of psychic attack and defense modes, and how mental battle between two psychics works.

Finally, the Appendix will include a wealth of suggested house rules, expansions, and modifications so that these can be ignored by purists or incorporated to whatever degree one desires. Also included here will be guidelines for using the Psionics rules with Spellcraft & Swordplay (indeed, I would be remiss if I didn't include this).

Elf Lair Games is pleased to be creating our first supplement that will make use the Labyrinth Lord and OSRIC open licenses.

There is no set release date for the booklet yet, but it is coming along, with Part One complete as of this writing.
Posted by The Grey Elf at 8:15 AM 5 comments:

So as I've been working on Twelve Parsecs, an alternate combat system has come to light for O.R.C.S. (the engine that powers ELG's games). A number of people have told me their one issue with S&S is that they dislike consulting attack matrices for every attack.

This is rather mind-boggling to me, as it really takes no longer than consulting your attack bonus and performing the calculations every time you attack, but I have heard the complaints.

As such, a new entirely optional combat system will be added to S&S in future releases. It brings combat in line with the ability check system from the rest of the game, and borrows heavily from the "Target 20" concept of A/OD&D combat (so it should still appeal to old-schoolers, I hope).

How it works is thus:

1. Instead of an attack matrix, players make a standard ability check to hit (usually Dexterity, though Strength is recommended for heavy, 2-handed weapons), attempting to get 11 as always. Characters still get any "attack bonus" listed on their level progression chart. Thus, a third-level warrior still gets 3 attacks with one at a +2 (or 2 at +1, as he sees fit).

2. Each weapon, instead of a unique matrix, has a flat attack bonus. A long sword, for example, attacks as +4.

3. The attack roll is then modified by subtracting the opponent's AC.

Example: A character who is a third level thief with a Dex of 16 attacking an opponent wearing Plate Armor (AC 8) would calculate his attack as follows:

The total, then, would be 2d6+1, as the -8 cancels out the rest of the bonus. It ain't easy to damage someone in plate armor with a long sword.

If the opponent was wearing studded leather armor (AC 3), the total attack roll would be 2d6 + 6 vs. TN 11 (a pretty fair chance to hit).

Keep in mind also that in most cases (Wizards excepting) a third level character will have at least two attacks.

Just a preview of something that's come up in design. Still needs a shake down and the bonuses tweaked for proper probabilities, but it seems solid on its core. Please note, also, that this will not replace the default combat system. The Attack Matrices will remain--this is presented as an option for those who prefer bonus calculation to table consultation.
Posted by The Grey Elf at 8:10 AM 5 comments: 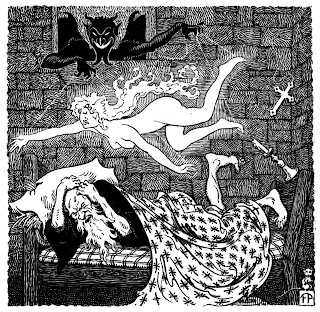