Note: This blog is a preview of the forthcoming Night Companion sourcebook for Night Shift: Veterans of the Supernatural Wars.

The core alignment system in Night Shift: VSW focuses on the law/chaos axis found in the earliest games of this type. An alternate alignment system is presented here that uses the good/evil axis instead, but also adds a new level of descriptiveness in the form of light and dark. The intent is to provide a better descriptor of a character's moral and personality types than the law/chaos axis does, and one that works a bit better in modern games. 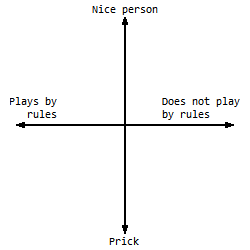 The idea of good vs. evil is easy enough to delineate and should be accessible to all of our players. If it's not, well, we worry about you a little. Essentially, "good" implies placing value on other human lives, on honesty, forthright living, and generally understanding the difference between right and wrong. Good characters generally keep their word when they give it, don't break promises, don't kill, avoid violence when possible and usually seek diplomatic solutions to problems. They recognize social problems and wish to see them corrected, and fair justice is important to them.

Evil characters are selfish, cruel, and value themselves over others in all things. While they certainly can develop relationships and care about others, such caring tends to manifest in a selfish way—where a good character wants to see someone they love happy, even if it hurts, the evil character wants to keep someone they love close, never let them go, and hold them under any circumstances. They'll ruthlessly remove obstacles in the way of what they want, and in the worst cases, they even take pleasure in lying, manipulation, and violence.

Neutral is the middle point of the Good-Evil axis. It can mean characters who lean one way or the other but aren't necessarily all the way "in." Most people in the world, for example, tend to be neutral but lean towards good. That is, they can be selfish and they're often tempted to put their own needs ahead of others, but they still have a conscience and they feel guilty when they don't do the right thing.

Other types of neutral characters may be those who function in society because they make a choice to act in a moral fashion, but don't have an innate imperative or drive to do so. That is, these characters don't commit murder, but that's not because they feel sick at the idea of killing, but because they rationally know murder is wrong and so they make a choice to fall on that side of the equation. These are the characters that have no compunction about killing in self-defense and may not even feel guilty about it.

Neutral characters who lean towards evil, on the other hand, do their best to remain within the law and the bounds of morality, but they don't sweat it if they have to step outside every now and again. Petty criminals who commit armed robbery but generally try to avoid killing might be those who are neutral leaning towards evil. Manipulators who lie and cheat, then justify to themselves why it's because they deserve it fall into this category as well.

Neutral characters have a range of possibilities, and for this reason, most characters will likely fall into the Neutral (Good) or Neutral (Evil) category. "True" neutral characters are rare beyond rare and very difficult to play, as they tend to have difficulty making decisions for themselves as they simply can't decide whether a given action should be taken. 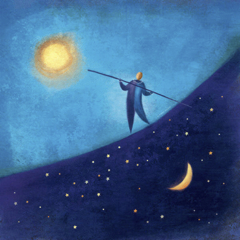 Light vs. Dark encompasses two distinct ideals each, and a character may be one, the other, or both. That is to say, a character may define themselves as light one way but not the other, and it's left to the character to determine which is the more important for them.

Light means both physical light, the daytime, and the sun; and it also means being outgoing, in the open, the center of attention. Light characters draw their strength from being in the spotlight, whether it's the noon day sun shining down upon them, or a literal spotlight as they stand on the stage soaking up the cheers of an adoring crowd.

Characters who are extroverted and outgoing tend to be light characters, as do the ones who thrive on being out and about during the daytime. These are the characters that enjoy going out to lunch, shopping, or hitting a café for their morning and even afternoon cuppa. They're the ones at parties who are in the thick of the conversation and are great at making new friends and acquaintances. They may be natural leaders or just outspoken team members.

Spellcasters who are of the Light variety will prepare their spells in the morning every day.

Dark, on the other hand, means both physical shadow and darkness, as well as characters who avoid the spotlight and prefer to remain behind the curtain. These are characters that draw power and strength from the night time, who are invigorated by midnight air and the silence of the late-night city streets. They enjoy late night TV, quiet and shadowy neighborhood bars, and they dislike social gatherings. They may even enjoy being among people, just so long as they can stay in the background. Dark characters might frequent Goth dance clubs, but prefer to sit in the corner with a beer or a cocktail rather than being out on the dance floor. Their energy comes from watching others, not from being in the thick of things.

Characters who are introverts, who don't like conversations unless they're deep one-on-one philosophical discourses, tend to fall into the Dark category. These are the characters who might be invaluable, powerful teammates, but who never call the shots, but rather whisper in the ear of those who do. They're the ones that people listen to when they speak up, because they speak up so rarely. They're observers.

Spellcasters who are Dark will prepare their spells at midnight or 3 am, sometime in the dead of night when everything is quiet, and they can be alone with their own personal demons.

Twilight characters are those who draw their power and strength from the period just before dark and just after dawn, when the sky is red and purple and the shadows long. They disdain the spotlight and don't like to be the center of attention, but at the same time they find cloudy days and the dead of night depressing.

These are characters who are comfortable in their own skin and are okay in crowds once a conversation starts—they may even feed on the conversation—but aren't likely to start the conversation themselves. They're good listeners and thoughtful leaders, but they might be people of few words, making those words they do speak matter. They can give a speech in public, but don't prefer it. Stage fright or performance anxiety might get the best of them every so often.

Many twilight characters have some level of impostor syndrome. They might be great at what they do, and even be able to put on airs of confidence, but deeply doubt their own capabilities and wonder when people are going to figure out that they're a fraud.

Spellcasters in the Twilight area will prepare their spells either at dusk every day or be up to do so just after dawn.

This system is a two-axis system. Each player will choose one space on each axis for their character to occupy, and work to interpret their character's persona within that space. A character could, for example, be light-evil, a megalomaniac who is out for themselves and is a brutal leader who believes that might makes right. Another character could be good-twilight, a deeply moral person with a black sense of sarcastic humor that they use to hide their own insecurities.

Still a third might be neutral-dark, the character who knows right from wrong, who recognizes social injustices, but doesn't care enough and is too gun shy to stand up and speak out in person. They try to do what's right, but they also know that to survive you look out for yourself and don't draw attention to yourself.

By combining the Good-Evil-Neutral with the Light-Dark-Twilight descriptors, you can create many different personality types, and it's the author's feeling that these descriptors work much better than the law-chaos-good-evil boxes we've all become used to for so long. Still, like most of the rules in Night Shift: VSW, this subsystem is entirely optional. It could even be combined, if you wish, with law and chaos to create a three-axis system. It can also be ignored entirely.

This bundle offers TWO core rulebooks--Amazing Adventures from Troll Lord Games and Night Shift: Veterans of the Supernatural Wars from Elf Lair Games, the latter co-written with noted designer Timothy S. Brannan. Also included are five adventures which can easily be used with either game, with only minor conversion work needed!Whether you're in it for the high-flying multigenre adventure or the creepy and shadowy worlds of horror and urban fantasy, this bundle has it all, at a whopping 40% off cover price for a limited time! 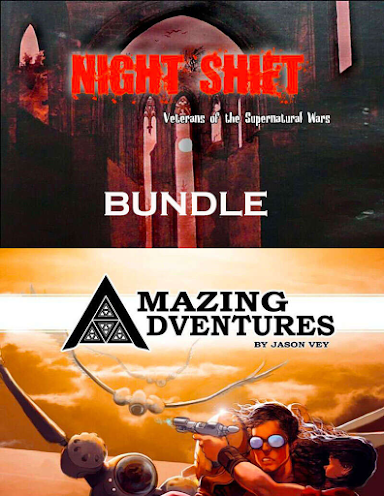 https://www.drivethrurpg.com/product/342653/Amazing-OGRES-BUNDLE
Posted by The Grey Elf at 6:34 AM No comments: