If you happened to miss the Kickstarter and are wondering what Night Shift is all about, pre-orders are open! You can now put in an order for your hardcover copy, or go for a bundle of a hardcover and PDF, and get your PDF right away.

The shipping date for the hardcovers from the Printer is June 10, and I will then be sending out the Kickstarters. After that, I will fulfill all pre-orders. 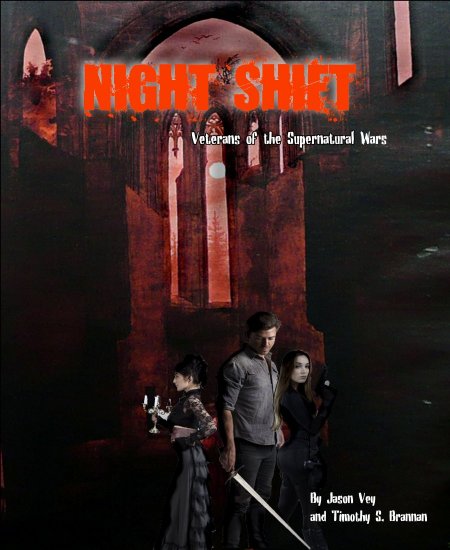 You can find all the information you want at http://www.elflair.com/nightshift.html, including a link to our free Quick Start rules on DriveThruRPG! 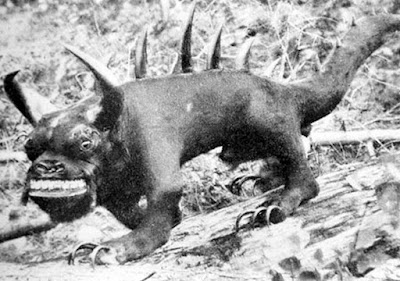 Meanwhile, check out Tim Brannan's blog at The Other Side, where he's released a new monster for Night Shift: The Hodag!
Posted by The Grey Elf at 4:10 PM No comments:

Night Shift is at Press: So What's Next?

Well, it's official: Night Shift: Veterans of the Supernatural Wars is at press. Our tentative completion date for it is June 10, and after the boxes arrive at my home office, they will begin shipping to backers. I need to work out how to take direct orders from my website (setting up a PayPal button is easy; coming up with a workable fulfillment process for myself is trickier). But I do plan to open up pre-orders for the game soon, which will enable people to get an early look at the PDF.

We are printing right here in the U.S. and our printer is open for business, so there shouldn't be any pandemic-related delays in fulfillment.

I have a number of things planned for the future, which I hope will really take Elf Lair Games to the next level as a legitimate game publisher. Unlike most companies, we will have not a single house system, but THREE. That's right--THREE house systems, each of which scratches a slightly different play style itch. These systems will be:

Next Up: Spellcraft & Swordplay 2nd Edition

I have begun work on the Spellcraft & Swordplay 2nd Edition rules. They're coming along quickly, but that's to be expected as they're based on mechanics I've been using in my home games for many years, so they're already thoroughly playtested. This will likely be our  next major release. Rather than a traditional high fantasy book, the new edition of the game will be strongly focused towards a gritty swords-and-sorcery style of play. I will still include traditional fantasy races like elves, dwarves, and halflings in an appendix for those who wish to use S&S as a traditional high fantasy game.

It's also worth noting that S&S second edition will not be an OGL game. It will include new ability scores, new spells, and its own rules system and terminology. It should still be easily usable by fans of the original OGL version, with very little learning curve required. My goal is to get away from the dependence on the Open Game License, while still offering someting very familiar to existing fans.

What About S&S First Edition?

I am still debating what to do with S&S first edition. It is currently available as a POD through DriveThru RPG. On one hand I would like to leave it there for fans to still get hold of. On the other, I feel like that would be competing with myself. The Second Edition will be traditionally published like Night Shift, so it will be available on DTRPG in PDF only. We'll see when the time comes.

After Spellcraft & Swordplay Second Edition I will be working on a new setting-specific fantasy roleplaying game called Wasted Lands: The Dreaming Age. This will require quite a bit of work to gather my various notes and ideas from years of development into a cohesive whole. My plan for it is to use O.G.R.E.S. as the core engine for the game, but to include an O.R.C.S./Spellcraft & Swordplay 2e Appendix, so you can use whichever system you like to run the game.

The setting is in the Robert E. Howard tradition with heavy Lovecraftian elements, crossed with elements of our own mythology. You will portray the great heroes of a bygone, lost age when humankind first crawled out from beneath the thumbs of the Great Old Ones, and are fighting to claim a world just afer the stars put the Outer Gods to sleep, but their minions still roam the world. One day, perhaps, your heroes with names like Odin, Isis, Inanna, and Zeus will be remembered as something far greater...

Tech-Noir: Role Playing in the Dystopian Near Future

This is just a working title at the moment, but Tech-Noir will use the Cd8 rules to present a dystopian future where a combination of disasters have shut down the Internet, reduced technology to the era of the 80s and 90s, and brought back the style and aesthetic of the Jazz Age. It's a mashup of hard boiled noir with primitive cellular technology, boxy computers, and a society in shambles. In some ways it's like a cyberpunk setting, but without the cybernetics. This is another idea I've worked on for quite some time and I'm excited for it to see the light of day.

Of course, we will hopefully be releasing support for our existing games as well, beginning with adventures and potentially sourcebooks for Night Shift. Some of our Night Worlds may see full book expansions, or we may release a book full of additional Night Worlds and Night Spots. We may add genre books to that core as well, giving you the opportunity to run games with different themes and eras. The possibilities are endless and while there is nothing planned specifically just yet, Tim and I have discussed a number of ideas.

Fiction, novels, and possibly a quarterly magazine are also on the table in the future.

So keep your eyes open and stay in touch! There's hopefully much more to come, and I'm very excited about the future of Elf Lair Games now that we've finally cleared the hurdle of becoming a traditional publishing company.