The Witch and Eldritch Witchery

I am working hard on putting the final touches on my next two books.  The Witch and Eldritch Witchery.

They are not quite ready for full on press releases or product announcements yet,  but I am very, very excited about them. 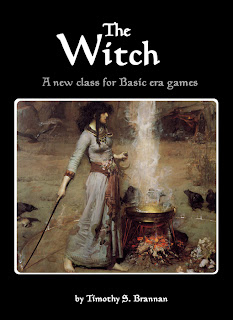 "The Witch" is designed to be used with "Basic Era" games.  Games that were released in the late 70s and early 80s and whose legacy is being continued with games like Labyrinth Lord and Basic Fantasy RPG.

The Witch will feature a new character class, the witch, and witchcraft Traditions so you can play any type of witch from fantasy, pulp or faerie tale.  In addition there are going to be new monsters associated with the witch as well as tons of new spells and magic items.  Many of which I have playtested over the last 12 years and some even dating back to my original notes I had written on the witch back in 1985.
Also included are appendices for extending the "Magic-User" class into a proper Wizard and Demi-human witches, something I had never considered doing in '85. 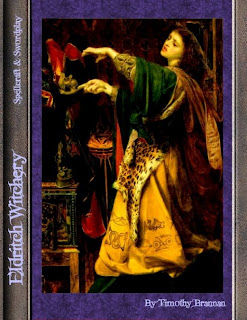 Eldritch Witchery is a bit different.  First it is for the Spellcraft & Swordplay game specifically.  Though it should be compatible with nearly any "old school" game or clone.

Many of the ideas that were used in "The Witch" found a home here as well, though in a different way that makes this a very different sort of class.  Actually it makes it two different sort of classes since Eldritch Witchery includes a witch and a warlock class.  As to be expected there are magic items and spells for both classes included.  This book also extends the magic of wizards, clerics and necromancers found in the S&S core rules and Monstrous Mayhem.

This book will also introduce demons to the S&S game and a new demonic hierarchy.  Make sure you know your stuff before you go into battle against the demons, a Baalseraph will have different abilities than the Calabim who are different still from the Lilim.

Which Book should You Get?
I am hoping both!  There is some overlap (I can only say "an athame is a ritual knife..." so many ways) but I am taking great pains to make sure each book has their own feel and unique material.  You could in fact get both and have three different takes on the witch, each one doing their magic a bit differently.  The traditions and lodges are not repeated between the books (save for one at present, but it makes sense to do so). Eldritch Witchery has demons, but the Witch goes into greater detail with everything.   I would say that either can be played with any version of the World's Greatest Fantasy RPG circa 1975 to 1985 and any clone based on it.

Stay tuned, I'll be posting some characters created with both books and we can see how they fare.

The planned release date is right around Halloween.
Posted by Timothy S. Brannan at 11:48 AM No comments: